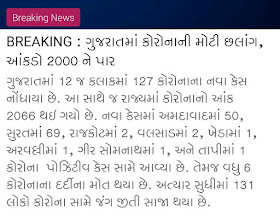 A telephonic survey was launched in the country corona update

The six people killed today include five from Ahmedabad, including three women and two men.

While a woman has died in Bhavnagar.

Of the 2066 cases in Gujarat, 19 are critical while 1839 are stable. While 131 patients have been discharged. The total death toll in Gujarat has reached 77 A.